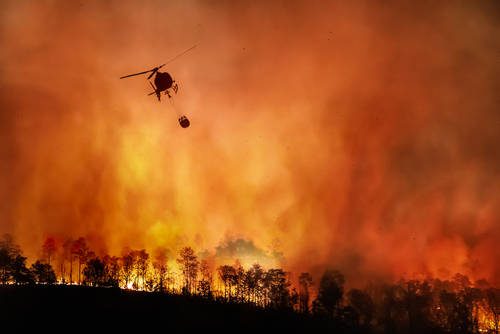 California is experiencing the largest wildfire of the year, with the prospect of further wildfire growth.

The McKinney Fire started on Friday and is burning out of control.  As of Sunday evening, it is at 0% containment.  The fire is in the Klamath National Forest in northern California, along the Oregon border.  Fire growth is expected to spread in all directions as Red Flag Warning for thunderstorms and lightning are in the forecast.

The McKinney fire has grown to over 80 square miles.  A second, smaller blaze started by dry lightning on Saturday, has threatened the small town of Ceiad. The two wildfires threaten about 400 structures, and a third fire prompted evacuation orders Sunday for around 500 homes.

In Mariposa County, near Yosemite National Park, California is still battling the Oak Fire that started on July 22, 2022.  Since the start of the fire, it has burned over 19,000 acres, and as of Sunday evening, it is 67% contained.

As the McKinney Fire intensified on Saturday, July 30th, Governor Gavin Newsom declared a state of emergency. According to a statement from Newsom’s office, A state of emergency allows for more flexibility when facing a crisis, it includes the suspension of regulatory statutes that may impede the emergency response and recovery efforts. It also helps access federal aid and unlock some state resources. The state of emergency proclamation also triggers the Emergency Management Assistance Compact, allowing firefighting resources from other states to assist California crews in battling the fires.

The largest wildfire that California has ever experienced was the August Complex Fire in Northern California in 2020.  It burned over 1,000,000 acres and was started by lightning.  According to Cal Fire, both the McKinney and Oak Fires are under investigation as a cause has yet to be determined.